This post was contributed by Sarah of Little Bins For Little Hands.

Some Fizzing Science Fun for Halloween

Liam absolutely loves fizzy science experiments with baking soda and vinegar! I think the chemical reaction and fun colors create a huge visual stimulation for him that gets him really excited and eager to do more. I actually keep a stockpile of baking soda and vinegar now because I know he will ask for more and more as we play. Now I always have enough available for lots of play! We haven’t done this type of science experiment in a while, and I was trying to think of what we could do with these great dollar store eyeballs. I had seen these dinosaur eggs with a packed baking soda mixture around each dinosaur, so I thought I would try it with the eyeballs for some creepy Halloween themed science fun. 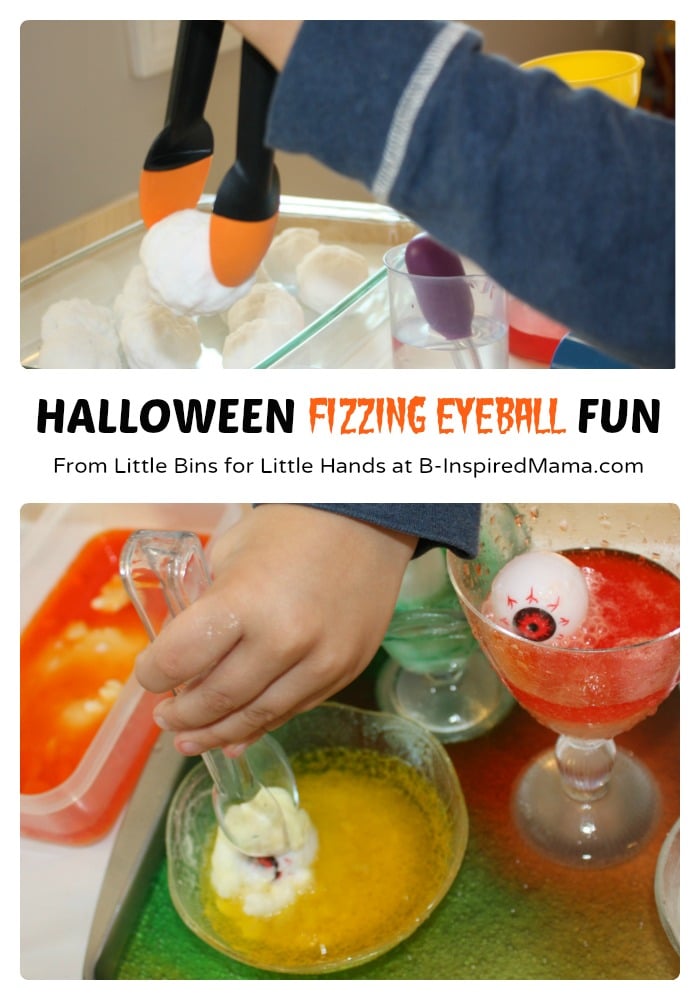 Mix until a firm paste (definitely wasn’t runny or even too wet).

I packed each eyeball with a pretty thick layer around it (probably thicker than necessary but lots of fizzing action). I ended up making this mixture about four times to cover all 12 eyeballs. I set each eyeball in a glass baking dish and let it sit out over night to harden! I also got our work table set up with different glass dishes, beakers, containers and tongs. In the morning I filled the containers with colored vinegar to get ready for the fizzing fun. He was so excited to see this activity and kept asking to get started right away! I needed my coffee first! 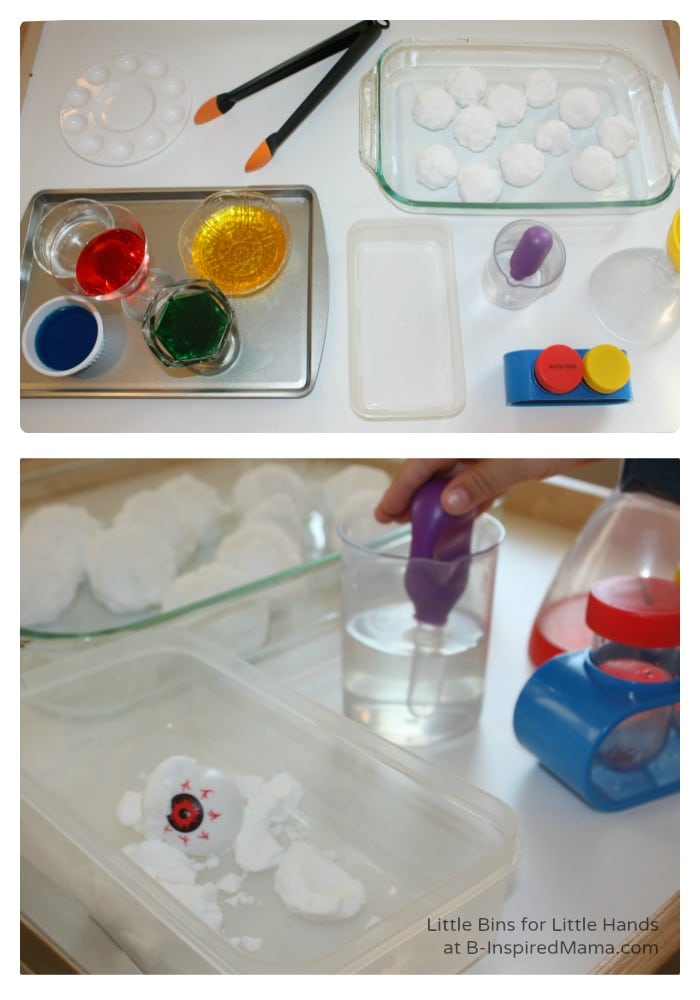 I did not want to direct him to much but he really waits for instructions or directions so I guided him to use the tongs and carefully pick up an eyeball and place it in the plastic container. I wanted him to see what would happen with the first eyeball. After the first one’s results, I hoped he would then be able to experiment a little bit more on his own since he knew what to do and what would happen. He used the eye dropper to suck up some vinegar (yay for fine motor skills in disguise) and squirted it on the eyeball that he had placed in the container. Hooray for fizzy eyeballs! 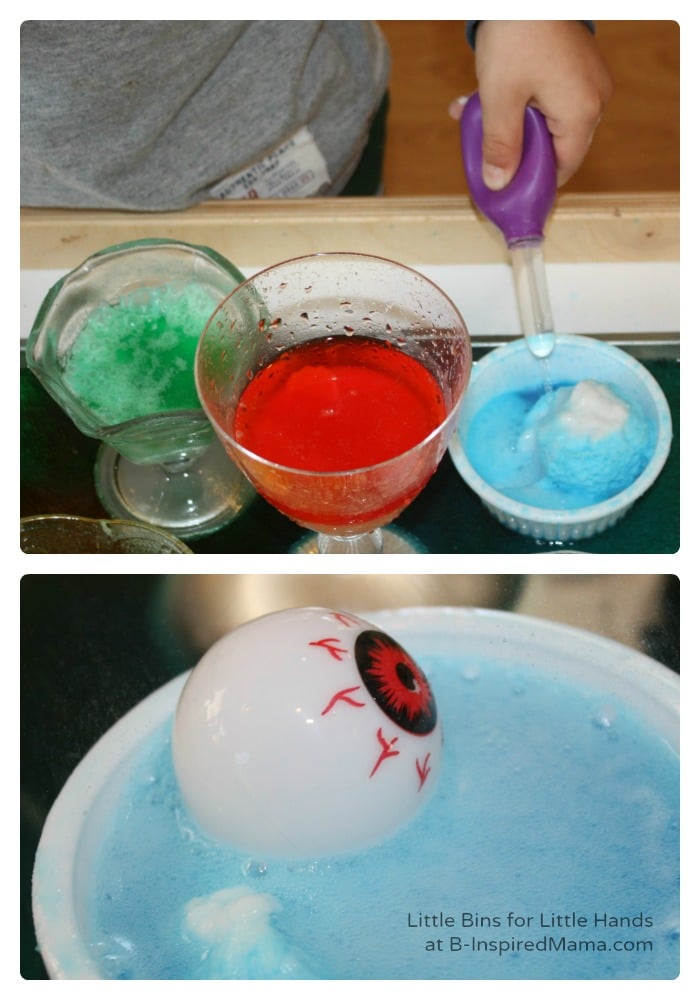 Now he knew just what to do and poured the beaker of orange vinegar over another eyeball. Very cool! He loved the reaction it made and set about putting eyeballs in the different types of glasses and containers of colored vinegar I had set out. I chose various sizes for added fun. So glad I put a tray under all of the containers because we had a lot of fizzing over going on! He enjoyed making the “volcanos” erupt from the tall glasses I chose! Of course, we had to get more clean vinegar out because he learned that once the vinegar and baking soda were mixed the used vinegar wasn’t as effective at making the eyeballs fizz as fresh vinegar. 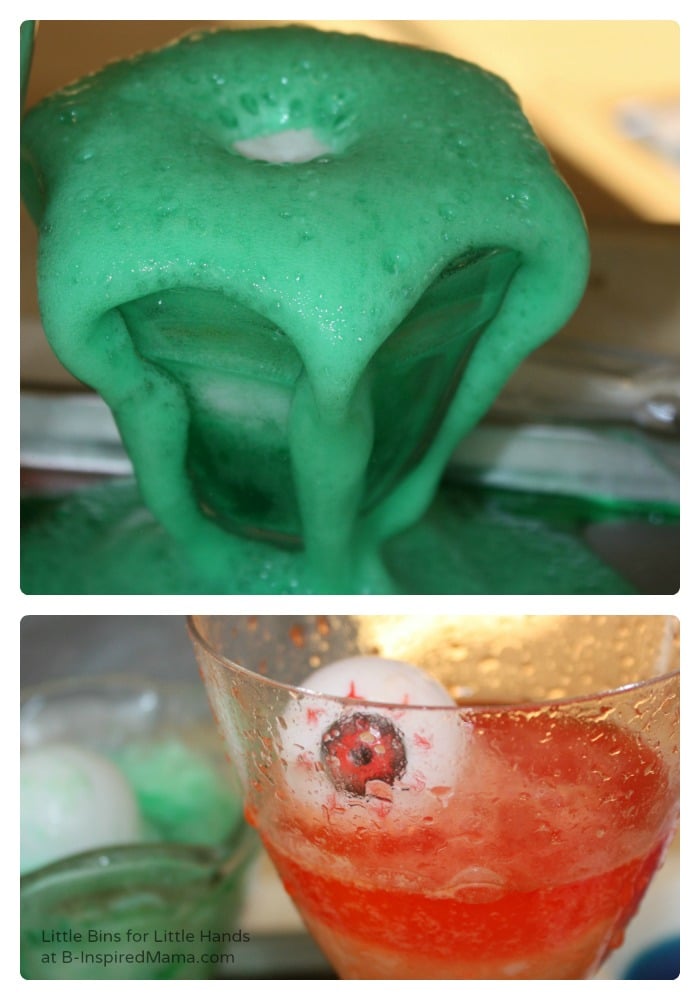 One of the fine motor activities I had included in this science activity was to use the tongs to pick up the freed eyeballs from the vinegar and place each one on the painter’s palette I had set out. We also counted the eyeballs to see how many more we had to free from the baking soda! He did a great job! 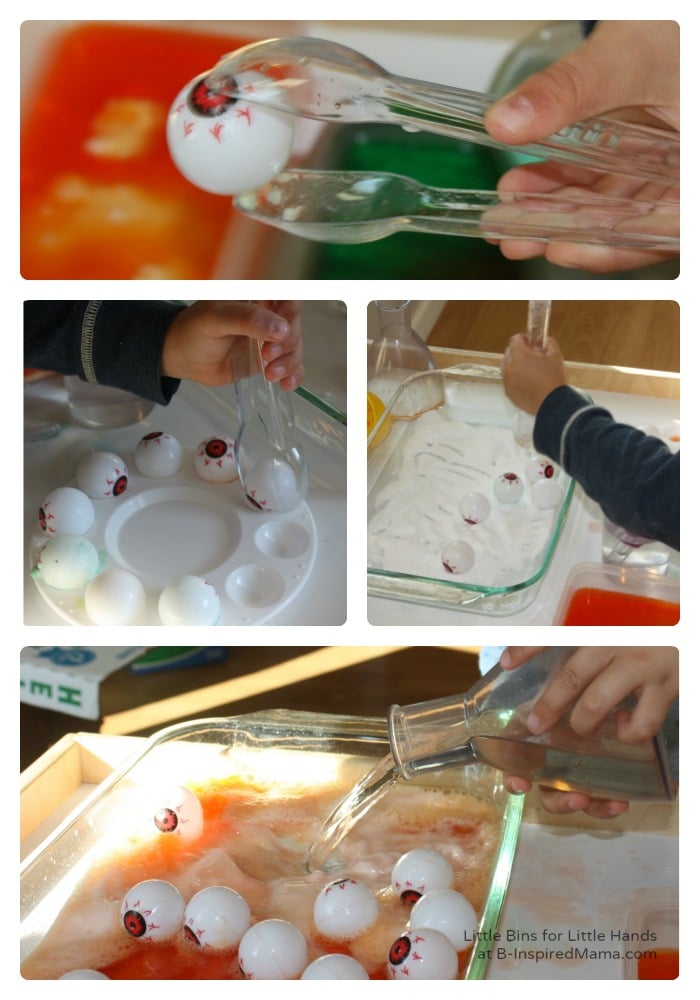 He continued to play with the baking soda and vinegar and I came up with an idea to pour the rest of the box of baking soda into the baking dish. I had him use the tongs to transfer the eyeballs from the palette to the dish. I then covered the eyeballs a bit more with baking soda and let him have more science fun with more vinegar. After a while I was really eager to see what it would look like if we poured a lot of vinegar into the dish. I gave him a cup full and it was so cool! Lots of bubbley fizzing fun and bouncing eyeballs. 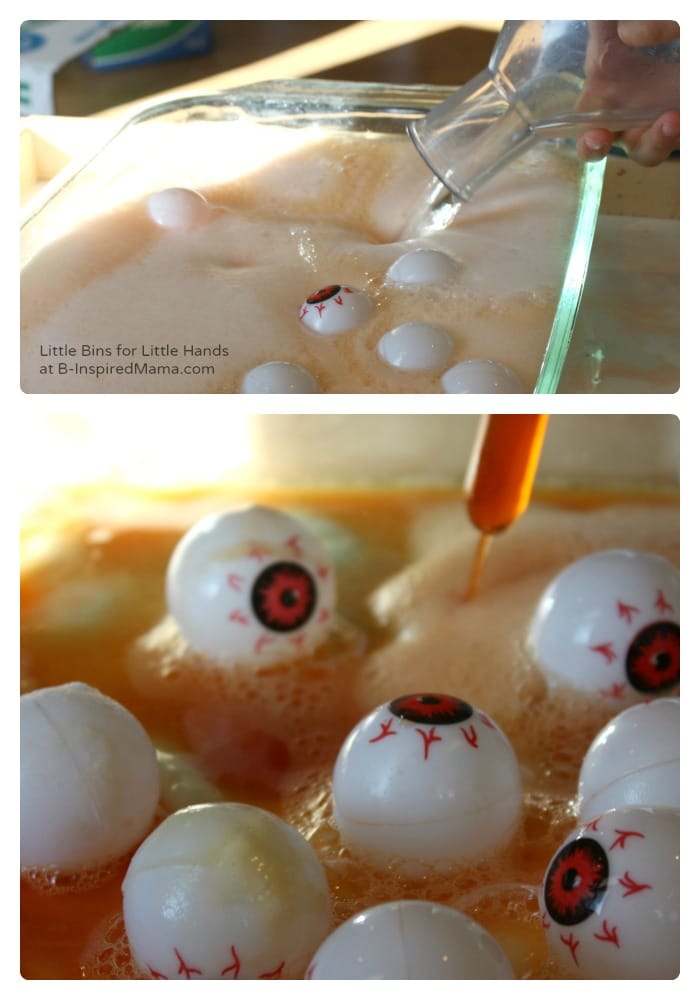 Free play followed for a long time afterwards, making eyeball stew and soup. What a sloppy but fun mess we made together. He mixed, stirred, and served all kinds of eyeball concoctions! He evened played independently for quite a while. I think we will do more baking soda and vinegar science activities very soon!

Sarah is a stay at home mama to one energetic four year old boy. Hands-on learning and sensory play are a big part of each day’s lessons and activities. Liam has Aspergers Syndrome and SPD, so each day is unique and a bit messy but fun! She is author of Little Bins For Little Hands.

I have to be honest; I haven’t done many baking soda and vinegar science experiments with my kids.  But I know they would love it.  I think this is the perfect one to do for the Halloween season.  Thanks for the inspiration, Sarah!

What’s your favorite experiment for science fun with your kids?  Let us know in the comment below!