If you’re a regular reader of Craftulate you’ll have noticed that we’ve been doing a lot of transportation-themed projects recently. When I’m out in the car with my son we often talk about “red light stop, green light go” so I decided to make this DIY toy traffic light for him to play and learn with at home. 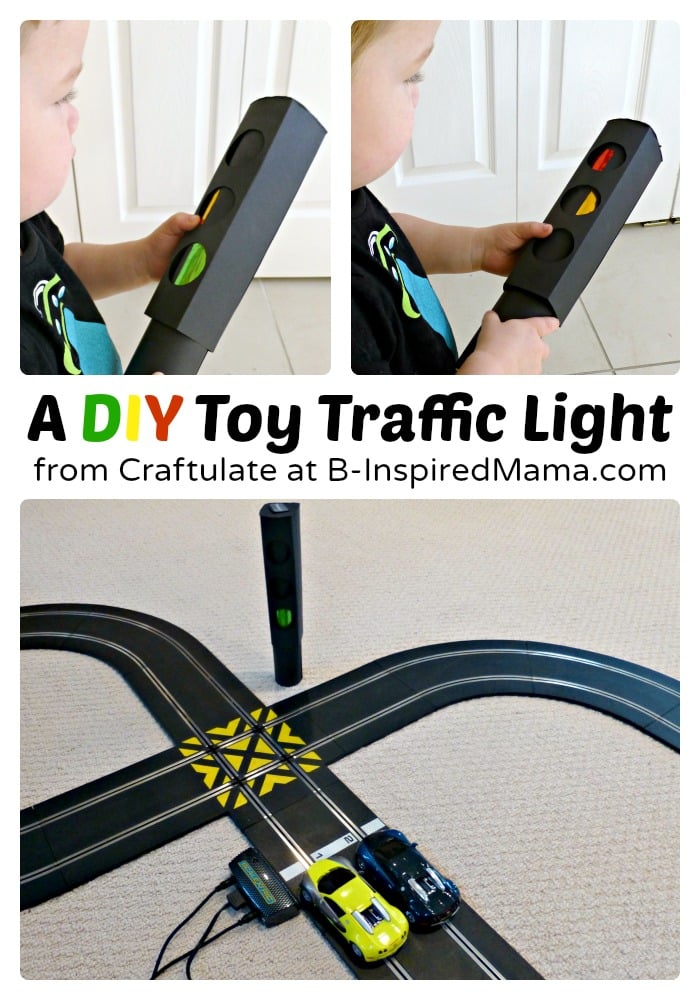 How I Made My DIY Toy Traffic Light

I started by wrapping a cardboard paper tube in black cardstock. 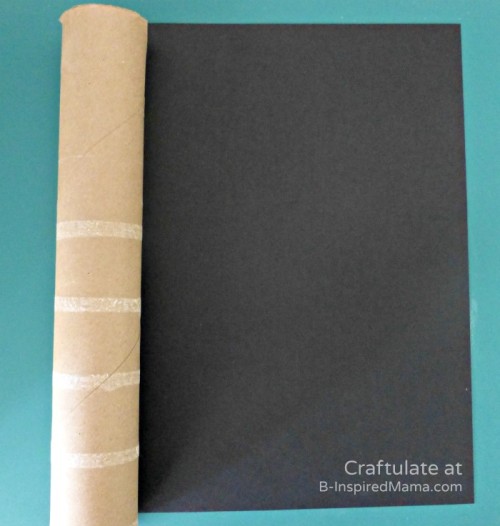 Then I folded another piece of black cardstock around the tube to form a four sided box shape. I found that the width of each side that wraps around the tube needed to be approx 1.75″. The total width should be 7.5″ (for the four sides plus half inch overlap) and the length should be 8″.

Before joining the box together I cut three circles out from one side of the box. The circles should be approx 1.25″ diameter. Keep one of the circles as a template for later. 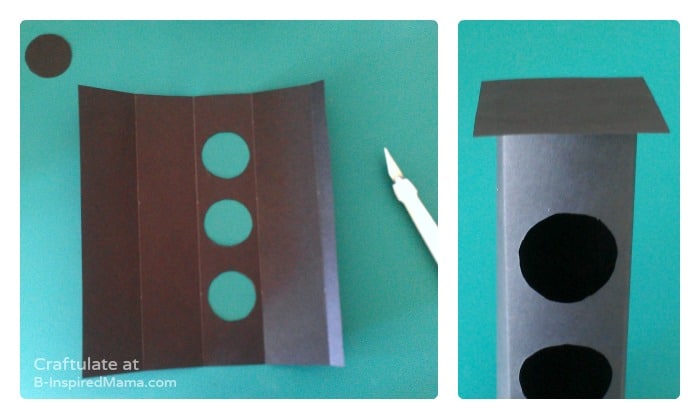 I glued down the overlap to close the box.

Now back to the cardboard tube. I traced around one end of the tube and cut out a circle of black cardstock slightly larger than the circumference of the tube. I poked a hole in the center of the circle and attached some thread with tape. 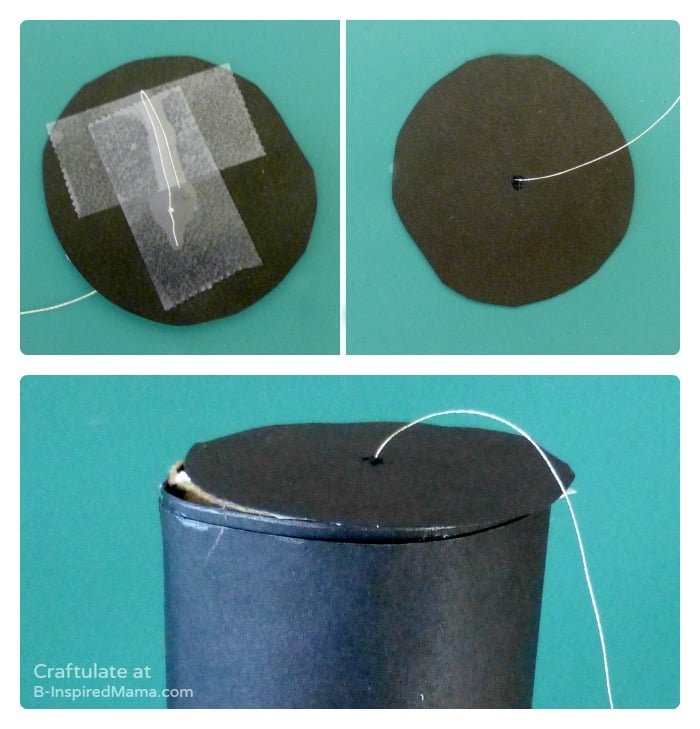 I glued this to one end of the tube with the long end of the thread at the top. Once the glue had dried I trimmed the edges to fit.

Next I needed to decide on the traffic light sequence. Here are the sequences for the US and UK, feel free to add the sequence for anywhere else in the comments for other users.

As we now live in the US, that was the version I decided to make. Nothing to do with it being the simpler sequence!

I used the circle template saved from earlier to cut out three squares of colored metallic paper, just larger than the circle. 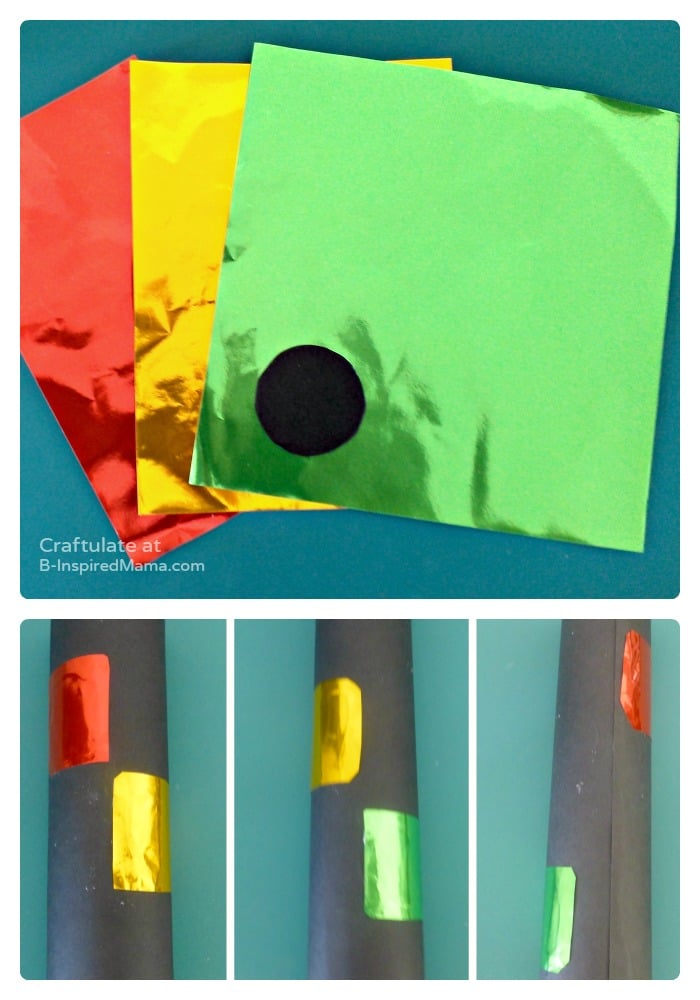 By lining up the holes from the box over the tube, I glued the colored paper at the appropriate levels, winding down the tube.

Then I cut out a square of black card 2.5″ x 2.5″ and cut a small hole in the center. I slid the tube into the box and poked the thread through the new square of card.

I carefully glued the square to the box to form the top of the traffic light, and made sure that the tube could still rotate and the thread was still poking out the top. After the glue had dried I trimmed the edges of the top and wrapped the loose thread around a piece of card. I taped the end of the thread to the card, ensuring that the tube could still turn freely. 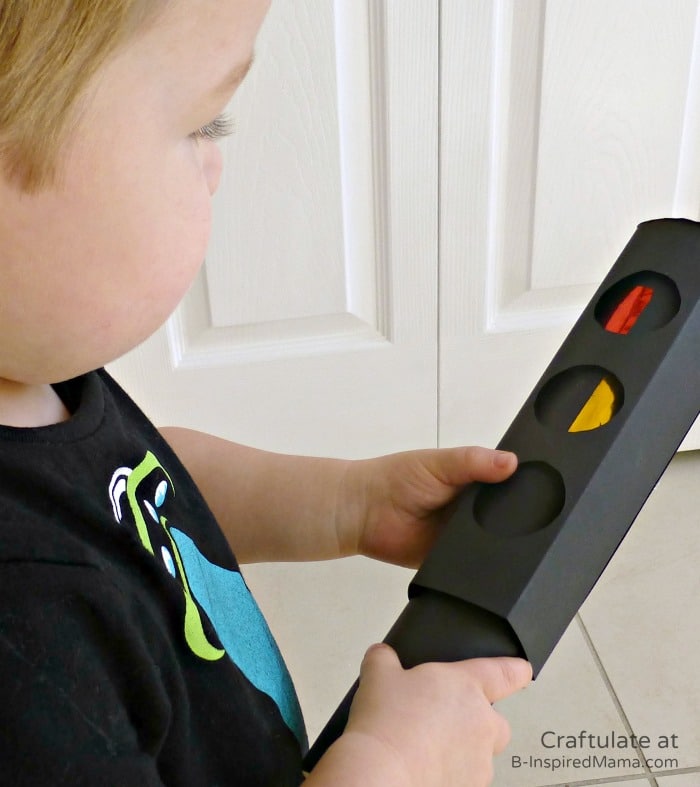 I gave the traffic light to F and he immediately recognized what it was – which was a relief! He spent quite some time turning the tube and running through the light sequences.
It had now taken up residence at the car track!

Georgina is the founder and editor of Craftulate, writing about crafts and activities suitable for toddlers and young children. She also loves papercraft, sewing, and cooking.

My kids would LOVE this DIY Toy Traffic Light!  I can see them making elaborate city or racetrack scenes for imaginative play with it.  And I would love that it would present so many great opportunities for learning, too, like color recognition and sequencing.  Thanks, George!

Previous Post: « Music Theory for Kids with a Music Note Game [Contributed by And Next Comes L]
Next Post: Bacon and Eggs Breakfast Muffins for a Quick Dinner »