This is a Sponsored post written by me on behalf of Michael Angelo’s. All opinions are 100% mine.

I’ve been wanting to try spaghetti squash as an alternative to carb-heavy spaghetti pasta for quite awhile.  When I learned about Michael Angelo’s® new Parmesan Crusted Stuffed Chicken Breasts, I knew that they would make the perfect main course for a side of spaghetti squash “pasta.”  And since the Parmesan Crusted Stuffed Chicken Breasts are so super easy – individually frozen and packaged and ready to throw in the oven – I focus on the kids helping me make our “MAGIC” Spaghetti Squash.  Here’s how we made our semi-homemade easy Italian dinner… 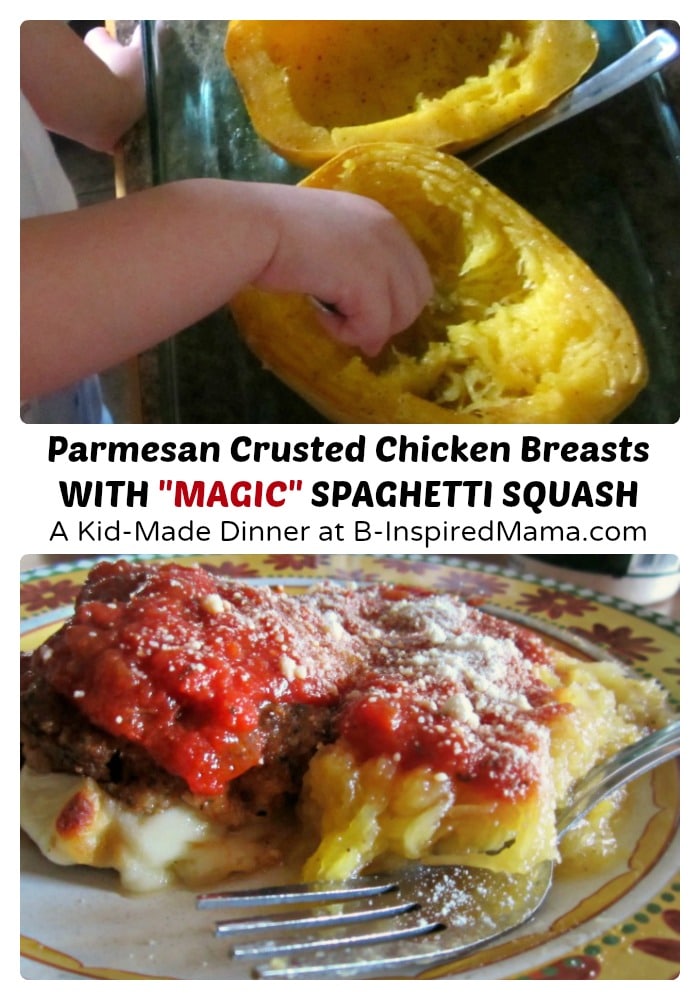 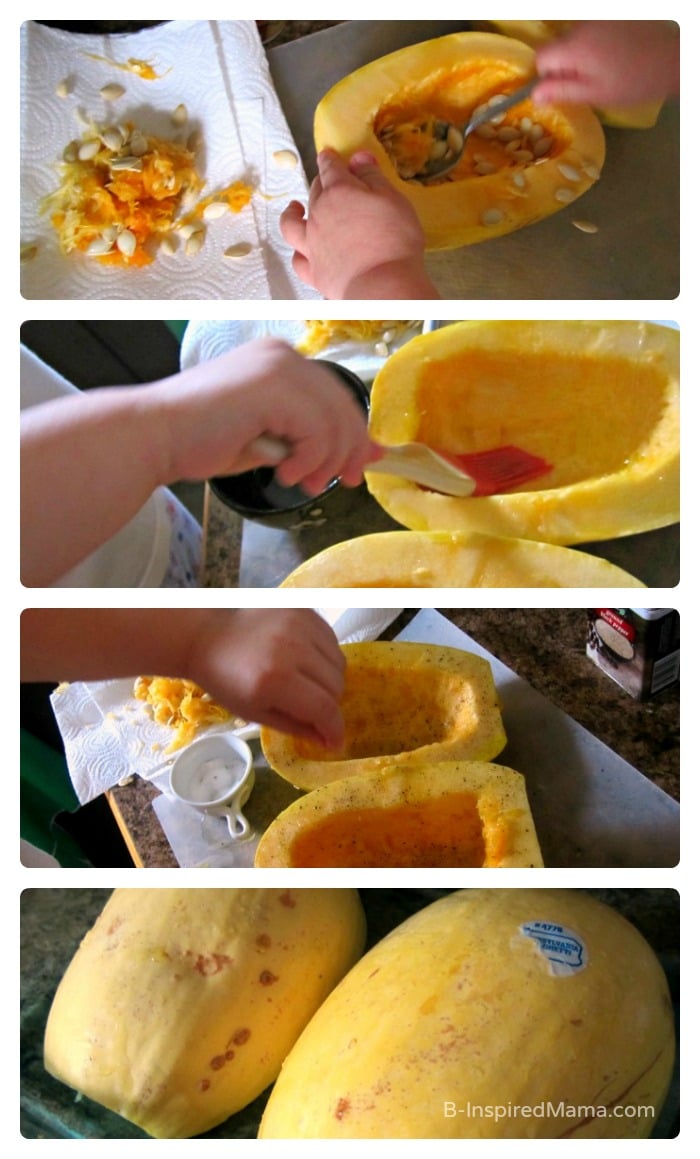 Priscilla helped me prepare the spaghetti squash.  She was really excited about it once I told her that it was “MAGIC!”  That once we roasted it in the oven it would magically turn into spaghetti!  Here she is excited telling Sawyer about it…

First we cut the spaghetti squash in half.  Then scooped out the seeds.  (Being just after Halloween, Priscilla thought it had “pumpkin guts!”  This allowed for some great learning about squash and pumpkins!)  Priscilla then brushed the cut sides with olive oil and sprinkled them generously with salt and pepper.  We then put them cut side down in a baking dish. And popped them in the oven at 350 degrees for about 45 minutes (or until a fork poked in them easily). 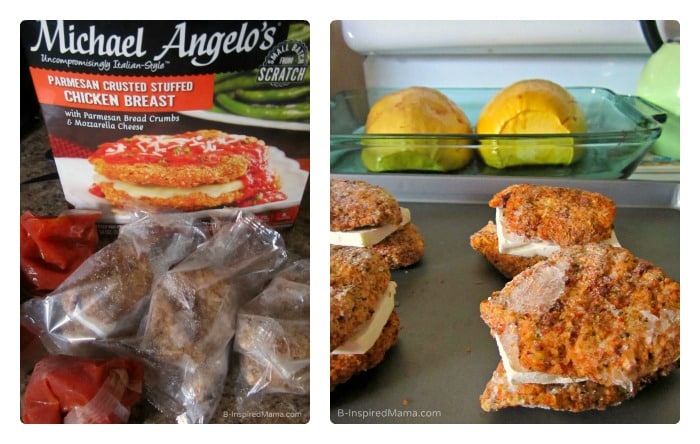 When the spaghetti squash was done, we took that out and threw in the frozen chicken breasts for 30 minutes.  This was so easy-peasy and allowed us to have some play time together while our chicken baked and our spaghetti squash cooled. 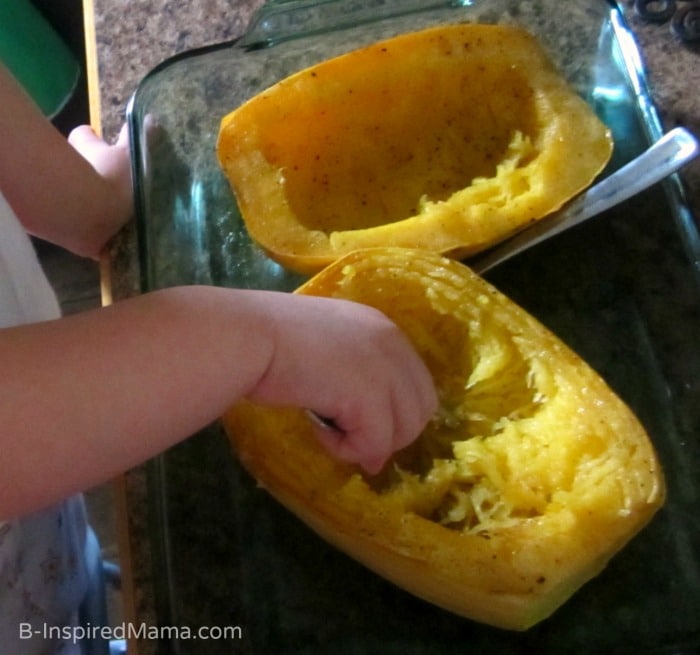 After about 15 minutes, our spaghetti squash was cool enough to begin it’s “MAGIC!”  We flipped it over and started shredding it with some forks.  The pulp of the squash “magically” turned into “spaghetti.”  Priscilla loved it! 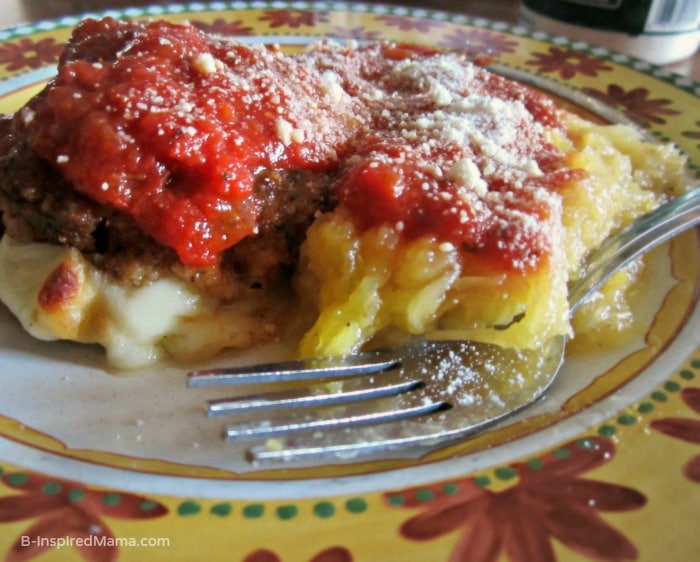 Once our chicken was fully cooked (according to the package directions), we plated it with some spaghetti squash and topped them both with the convenient marinara sauce that was right out of the Michael Angelo’s® box.  It was a pretty yummy and healthy dinner for being semi-homemade, I think!

The Michael Angelo’s® Italian Entrée made it so easy to let the kids help with dinner.  I felt good about experimenting with a new recipe, too, knowing that at least our main course would be delish!  And even though the main course is not technically homemade, all of Michael Angelo’s® Italian Entrée are made from his Italian family recipes in small batches using great ingredients, with no preservatives, additives or fillers.  So, no, I don’t feel one bit guilty that it’s not 100% made by this mama.  Plus, since they’re individually wrapped and frozen, I only need to cook the ones I need of the six included in the box.  Perfect!  If you want to try some with your kiddos, head on over to Sam’s Clud freezer section to find them.  And the fun from Michael Angelo’s® Gourmet Foods doesn’t end there. You can enter to win a FREE TRIP TO ITALY for you and one guest! You can simple enter online for a chance to win a trip to tour Italy with Michael Angelo and his mom Sara.

Have you let the kids help in the kitchen lately?  Have you ever tried Michael Angelo’s® Italian Entrées?  How about “MAGIC” Spaghetti Squash?  I’d love to hear about it in the comments below!

Previous Post: « Reading Fun in a DIY Book Nook [Contributed by Craftulate]
Next Post: Simple Activities for Toddlers from The Weekly Kids Co-Op »