How to Teach a Child a Second Language

Want to teach your child a second language but not sure where to begin?

While some still argue about the benefits of teaching a child a second language, most parents today agree that exposure to a second language helps their child academically, socially, and economically. More fundamentally, it is central to raising a child who is a world citizen.

But how do you begin? Don’t feel bad; most parents have no idea how to teach a child a second language. Here are some tips to get you started… 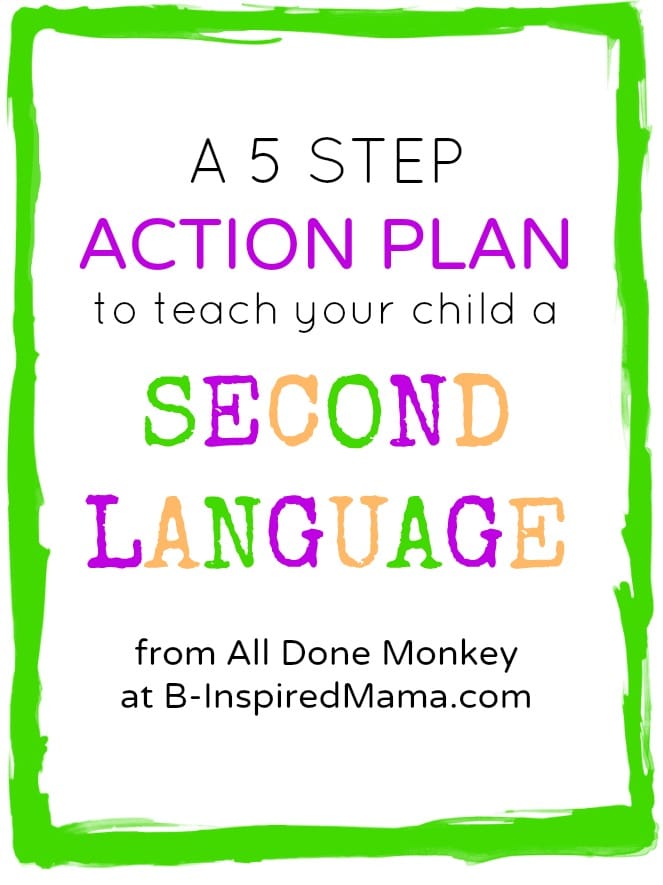 If you start to teach your child a second language, you will mostly receive a lot of support, but – particularly if you start very young – you will also face criticism. Many people still think that teaching very young children another language will confuse them and delay speech development in their primary language.

Rest assured that this is not the case. Though there are many myths about bilingual children, experts agree that their speech development is perfectly normal, just a bit different than monolingual children. And the benefits you will give your child are enormous, so make sure you know the facts when you are confronted with nay-sayers.

How well do you know a second language? Assess your own level of knowledge in order to choose the best method for teaching your child:

a. Help! I don’t know another language!

First of all, don’t despair! The main ingredients for success are desire and a willingness to make the effort. Some parents who are fluent in another language never bother to teach their children, while others who speak little other than English manage to raise children who are bilingual. It will certainly require more work and time, but it can be done!

Any exposure to another language is helpful. If nothing else, you can help your child understand that there are other ways of speaking and understanding the world. And if a child is exposed to another language at an early age, even if they don’t gain fluency, it will be much easier for them to learn that language later in life.

b. Well, I studied a foreign language back in school…

Great! Even if your skills are rusty, you still have a head start. You will be surprised how much comes back to you once you get started. So brush up on what you learned back in high school, and jump right in! Teaching your child will be a great motivation to dust off those old books (or find new resources online).

c. I speak another language fluently.

You are definitely fortunate and have a real opportunity to pass this valuable knowledge on to your child. That’s not to say it will be easy. Many native speakers struggle to retain their children’s interest when surrounded by a sea of English (or other majority language). But take heart that others have overcome this obstacle and found a method that works for them.

Every family is different, so what works for one family may not work for another. Beyond your own knowledge of another language, consider the environment in which you live. Are there many other speakers of the language you have chosen? Learning Spanish in south Texas, for example, is very different than learning it in rural Iowa, simply because of the opportunities to interact with native speakers.

Keeping all this in mind, here are some common methods of teaching another language that you can consider:

As described by one mother teaching her son Spanish, this method involves speaking the second language to your child in specific situations (such as just at bedtime or when at home). The Language Boundaries method can work well if you find it difficult to speak another language to your child all the time, either because you are not fluent or because you don’t have support from other speakers.

b. One Parent One Language

This is the method we have chosen in our house. In this method, each parent speaks to the child exclusively in one language. (So, for example, I speak to our sons only in English, and my husband speaks to them only in Spanish). A main advantage of this method is that it helps prevent any confusion between the two languages. It works especially well if you and your spouse are native speakers of the languages, as in our case. It is always nice to be able to speak to your child in the language you feel most comfortable speaking and to be able to use the same expressions, lullabies, and jokes that were told to you as a child.

This is another popular method, in which only the second language is spoken in the home. This method combats a major problem in teaching another language, which is that children tend to speak the language that is most common in the culture, even if they understand another language. So, for example, even though my husband speaks to our sons only in Spanish, our toddler almost always responds in English, since this is the language he hears the most during the day. If only the minority language is spoken at home, children have a much higher (and more constant) exposure to it and so are more likely to speak it.

These are only the most popular methods, so if none works for you, keep researching until you find a good fit.

4. Start early and be consistent.

The sooner you can begin exposing your child to a foreign language, the better. Young children are like sponges, not only mentally but socially. As they get older, many children are more influenced by their peers than their parents and so resist learning another language if it is not common among their friends. By starting young, you can lay a good foundation before they decide it’s not “cool,” so that when they are even older and realize just how cool it is, they will already be ahead of the game.

And stay the course, even if you sometimes wonder what effect your efforts are having. Be assured that even if you don’t see results right away, your child is greatly benefiting from your hard work.

There are so many wonderful resources out there these days for multilingual families. It is fairly easy to find bilingual books, including ones for people that aren’t fluent. There are also wonderful DVDs and online resources to teach another language, including the wonderful website Spanish Playground. You can also look into Spanish immersion classes, particularly if you are not fluent yourself or live in a community with few native speakers.

Most importantly, you can also find support from other multilingual families who can sympathize and offer advice on how to teach a child a second language. For example, you can find many bilingual bloggers in the Multicultural Kid Blogs. An exciting new resource is the Raising Multilingual Children blogging carnival, for parents, bloggers, and professionals to share tips and resources.
Leanna is a stay at home mother to a sweet, funny, rambunctious three year old boy and his adorable, smiley baby brother. She draws inspiration from the Writings of the Bahá’í Faith and tries to raise her Monkeys in a fun, spiritual, loving environment. She and her husband, who is from Costa Rica, are raising their boys to be bilingual and bicultural but more importantly to be “world citizens.” Having studied anthropology, history, and library science, Leanna now trolls the internet and Pinterest for recipe and craft ideas. “All Done Monkey” is her attempt to make sense of it all.

Teaching my children a second language has always been something I’ve wanted to do.  But it’s always seemed unattainable with the little knowledge I have in other languages to begin with.  I love how Leanna breaks it down and makes it seem “doable” for all of us mamas!  Thanks, Leanna!

I love to link up with: Contest Corner, Made by Me Monday, Just Something I Whipped Up, Made by Little Hands Monday, Tasty Tuesdays, Frugal & Fabulous Giveaways, Tuesday Tots, Tip Me Tuesday, Get Your Craft on Tuesday, Made by Me Wednesday, Kids Get Crafty Wednesday, The Mommy Club Wednesdays, Your Creative Timeout, Artsy Corner Thursday, It’s Playtime Thursday, Thursday Giveaway Linky, The Weekly Kids Co-op, Read Explore Learn Friday, For the Kids Friday, Kitchen Fun and Craft Friday, Bonggamom’s Friday Finds, Freebie Friday, Pin It Friday, Show & Share Saturday, Share it Saturday, Super Saturday Giveaway Link-up, The Sunday Showcase, The Sunday Parenting Party, Around the Blogosphere, Afterschool Express, and Link & Learn Sunday.
This post may have affiliate or sponsored links. Please see my disclosure policy.

Are you teaching your child a second (or third or fourth!) language? What works for you, and what are your challenges?