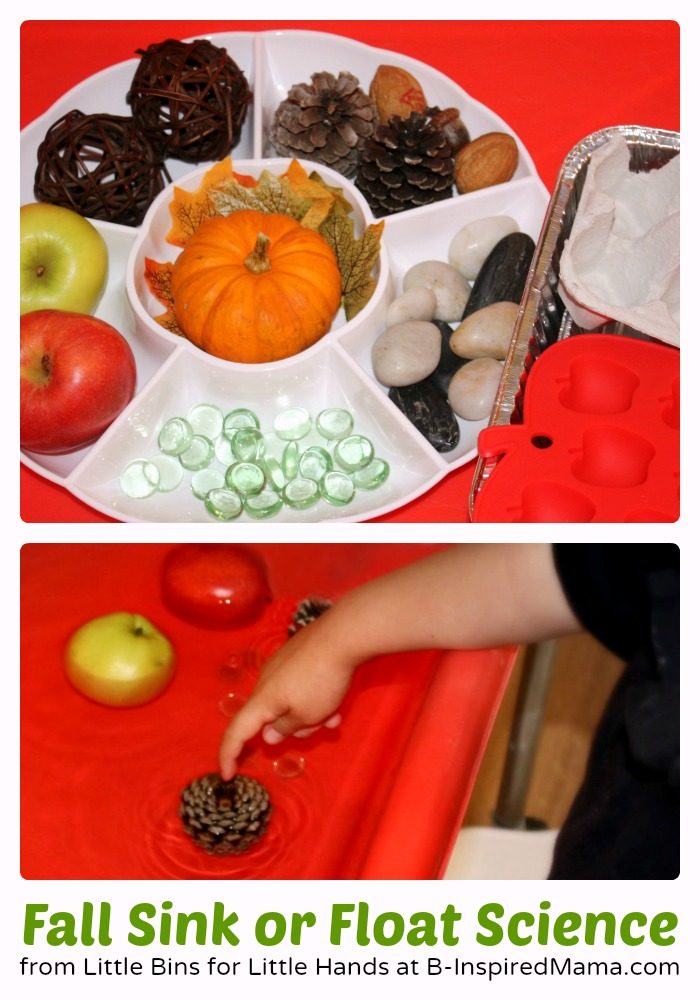 This Fall Sink or Float Preschool Science Activity post was contributed by Sarah of Little Bins For Little Hands.

Sensory play is a wonderful way to learn! Most of the time our bins are filled with dry materials for sensory activities, but we also enjoy using water for sensory play. Although a little messy, it is still fun to do inside. 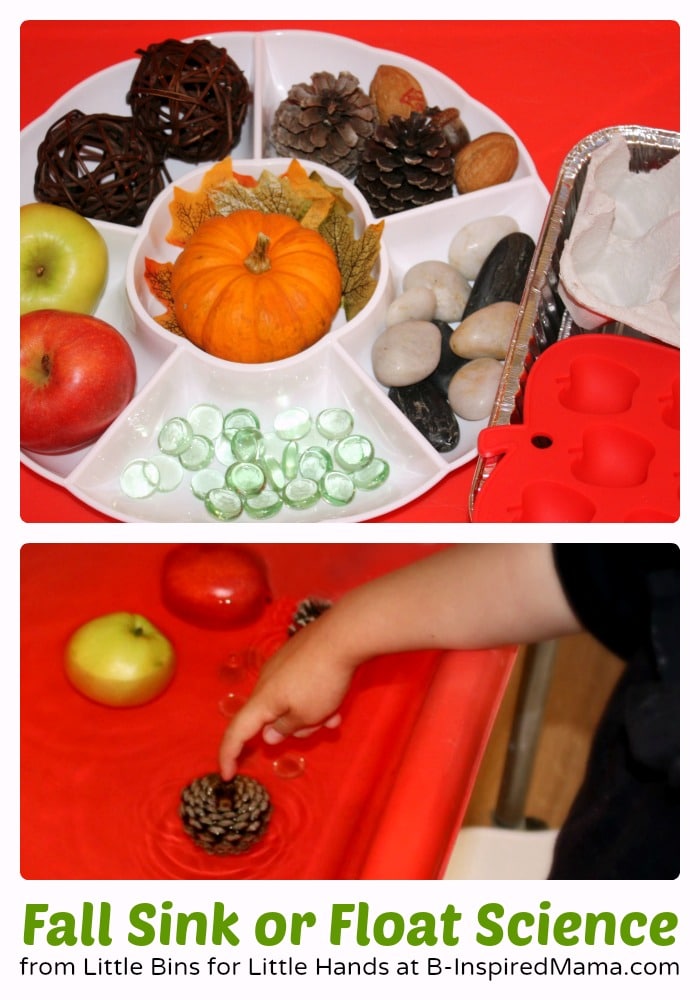 I created this invitation to experiment by choosing lots of fall items for him to experiment with, including items that have been in our sensory bin and placing them on our favorite tray. This time, I also included some items – baking tins and egg carton pieces – that could double as boats. I was hoping to have him experiment with sinking a floating boat or keeping the boat floating. 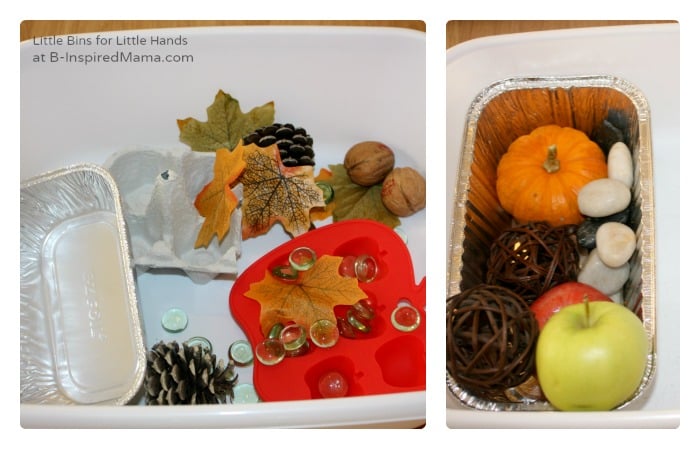 Here’s what we used: 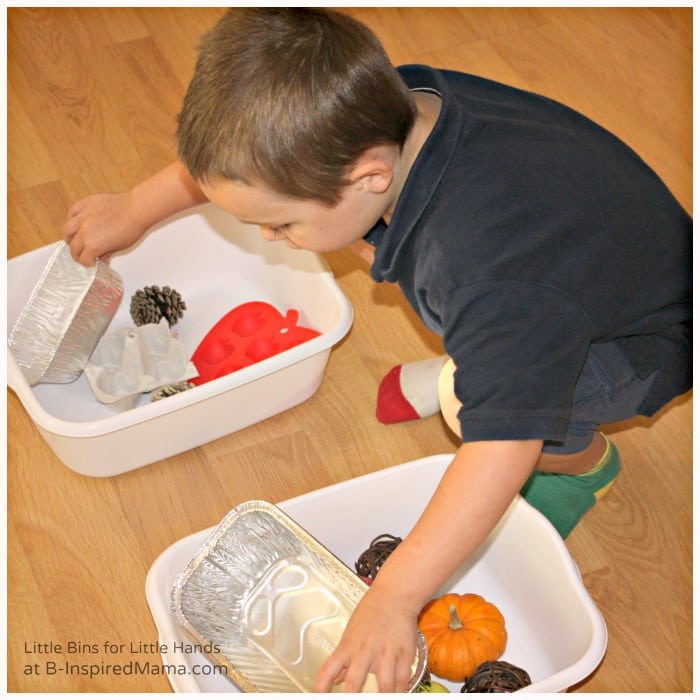 To start off the science experiment, we used the Scientific Method to think about which items on the tray would float and which items would sink.

I put out two tubs for him to sort items into sink or float. We talked a little about why he thought an item would sink or float, including weight and size. I was glad he chose some things incorrectly, so he could really see an experiment in action.

Also, I had him help me fill the bin with warm water. (I find that if the water is on the warm side it is more enjoyable.) We have a large bin on wheels that he rolls over to the sink and uses the hose attachment on the faucet. It’s quite a treat!

Experimenting with Sink or Float 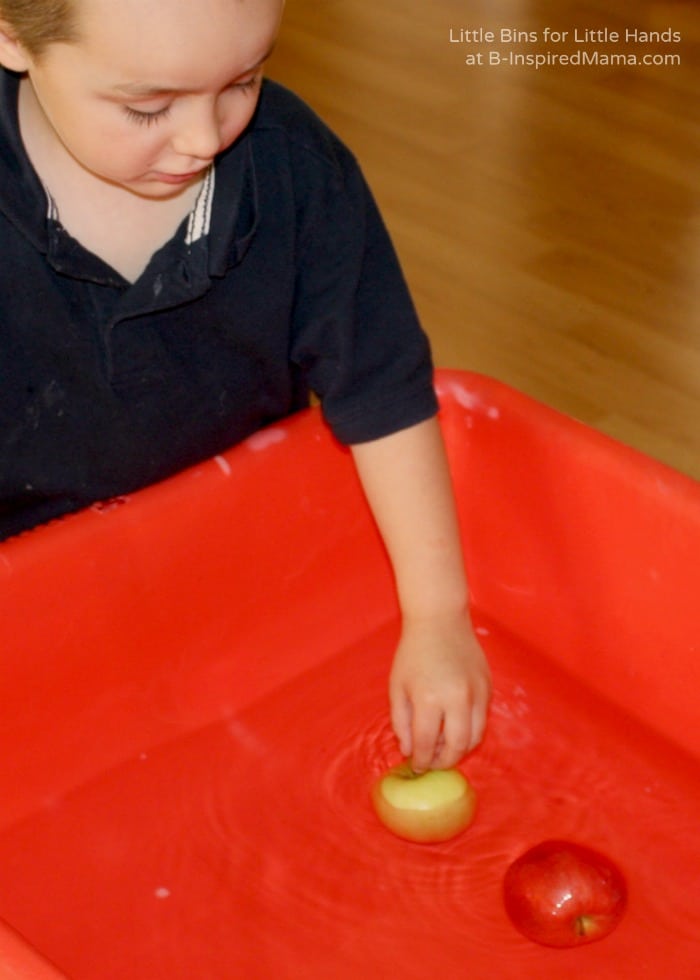 Once the bin was filled, he chose the sink items first. He was almost in disbelief that some of the items that he thought would sink, like the apples, did not! He had also chosen the gems as floating because they were small, but they really sank because they were heavy. The large aluminum baking pan was a sink item and the small one was a floating item, but he noticed that they both float. I was glad he commented on it all and remembered whether he had chosen something to sink or float. We repeated the process for each item in both bins. 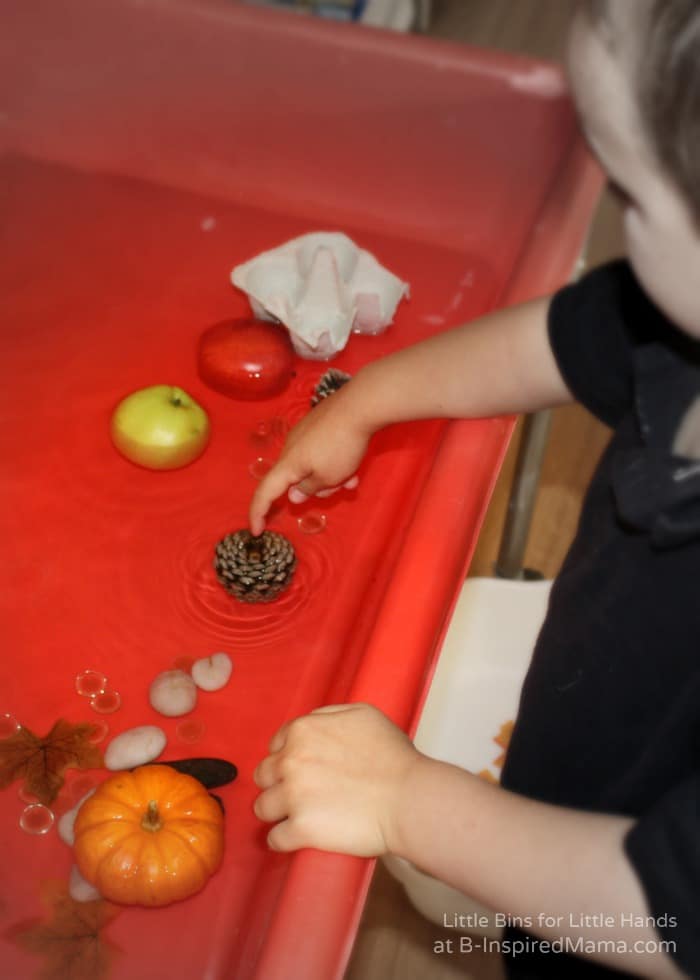 When we were finished determining what each item would do, I asked him to try to sink the pretend boats (aluminum pans, silicone apple, and egg crate). He tried putting different combinations of items into each pan to see what was just enough or too much and separating smaller items and bigger items between the different boats. He noticed it took a lot of items to sink the large pan and fewer items to sink the little one. Or it took lighter items and fewer heavier ones! Another observation was that just the right amount of items like the gems in the apple tray would still let the apple tray float. 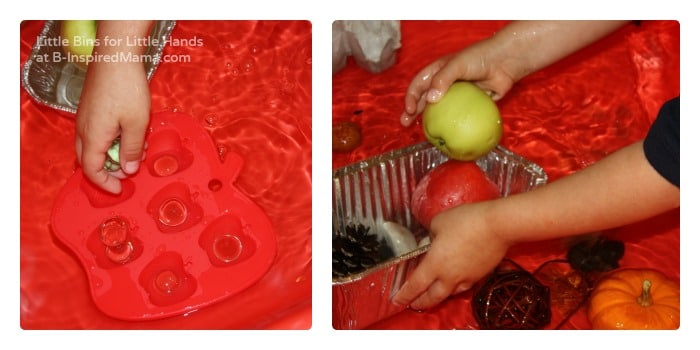 The final part of the sink and float experiment was to put everything back into the two bins, still choosing sink and float. This time, however, the task was using actual observation rather than just a hypothesis. I showed him a picture of the two bins before we started the experiment and he pointed out the differences. Lots of things he thought would sink actually floated. He remarked how he thought it was cool! 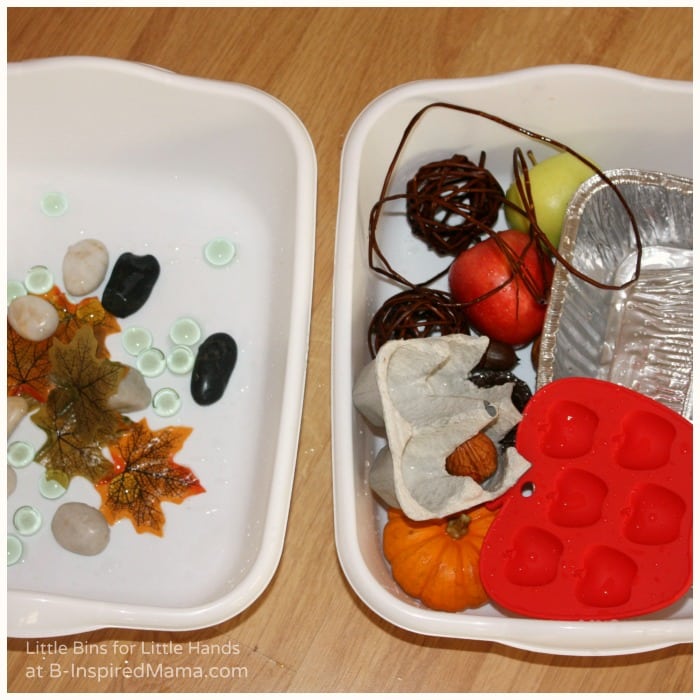 We wrapped up our Preschool science activity with what else? Free play, of course! Lots of splashing, sinking ships, making waves, and plunking walnuts and acorns. The floor was a little wet when he finished, but it was all in the name of science! 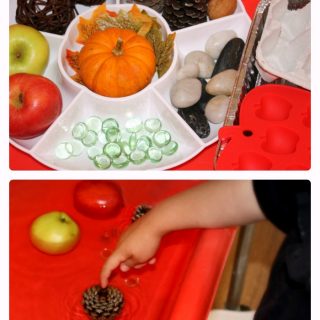 Introduce your child to the Scientific Method and the concepts of sink or float with this fun and EASY fall preschool science activity!
5
PRINT PIN IT! RATE
Prep Time5 minutes
Activity Time15 minutes
Total Time20 minutes

Sign up for the newsletter to get MORE fun kids craft & activity ideas, and we'll send you a FREE gift - Printable Conversation Starters for Kids and Parents - right to your inbox TODAY!

Great! Now, pop on over to your email to confirm and download your printable.