(All free LEGO Printables can be downloaded at the bottom of this post.)

I cannot believe that my Sawyer turned 6 years old this week!  I’m so proud of the little man he’s becoming; he’s such an awesome kid.  And an awesome kid deserves an awesome Birthday party, right?! 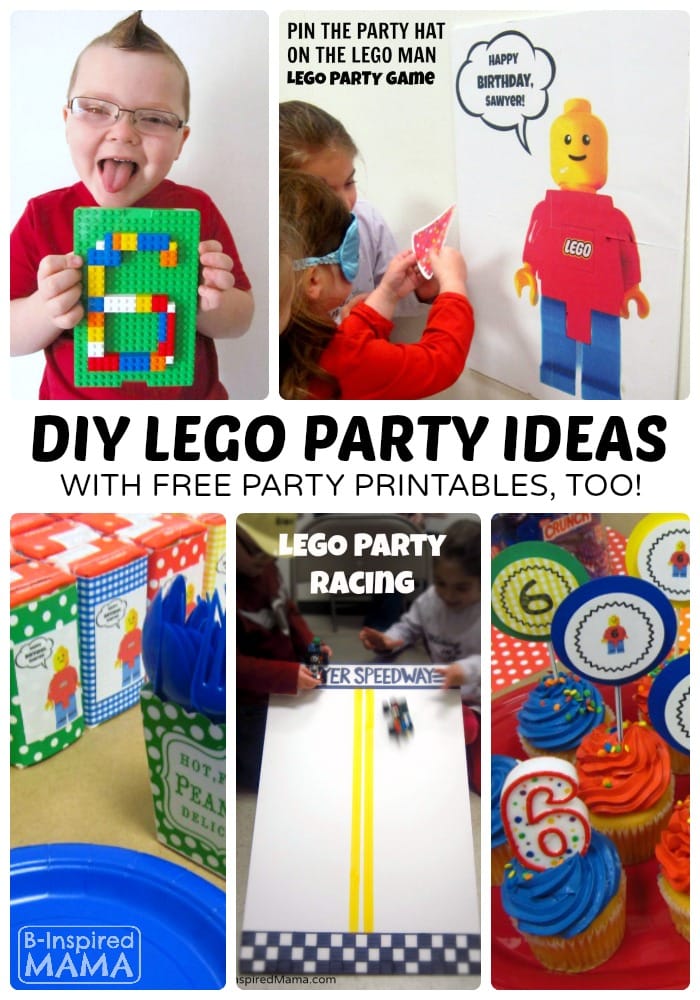 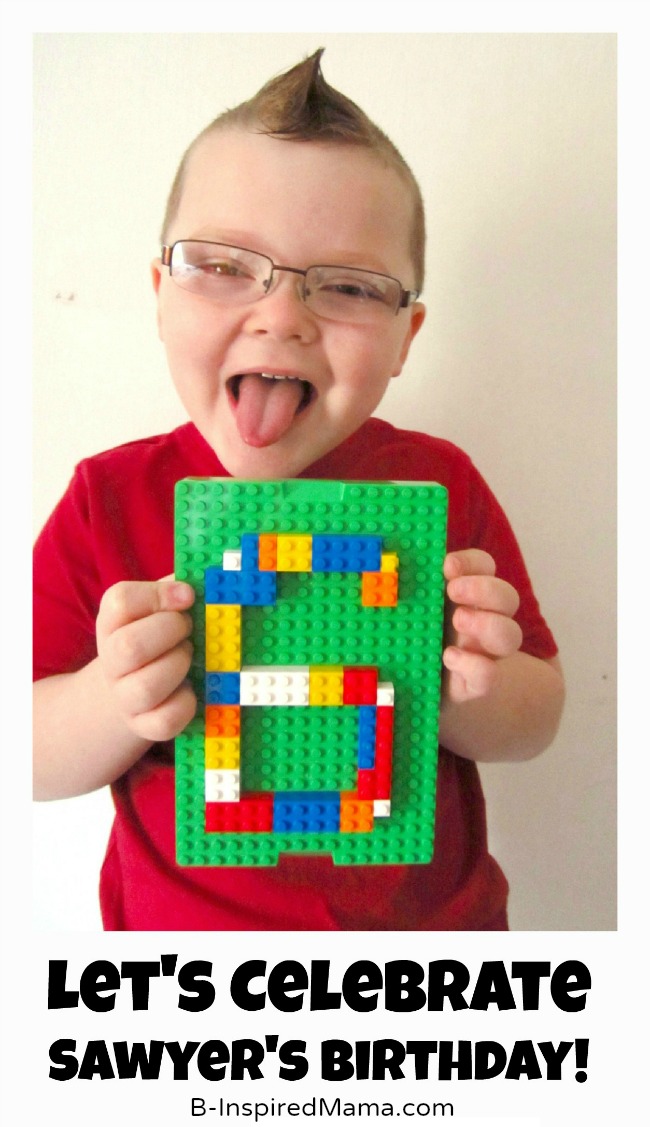 First, I had Cliff and Sawyer create the number 6 out of LEGOs

.  Then, I took a silly photo of Sawyer holding the LEGO number.

Them I used the photo to make a simple photo card invitation at Walmart.com 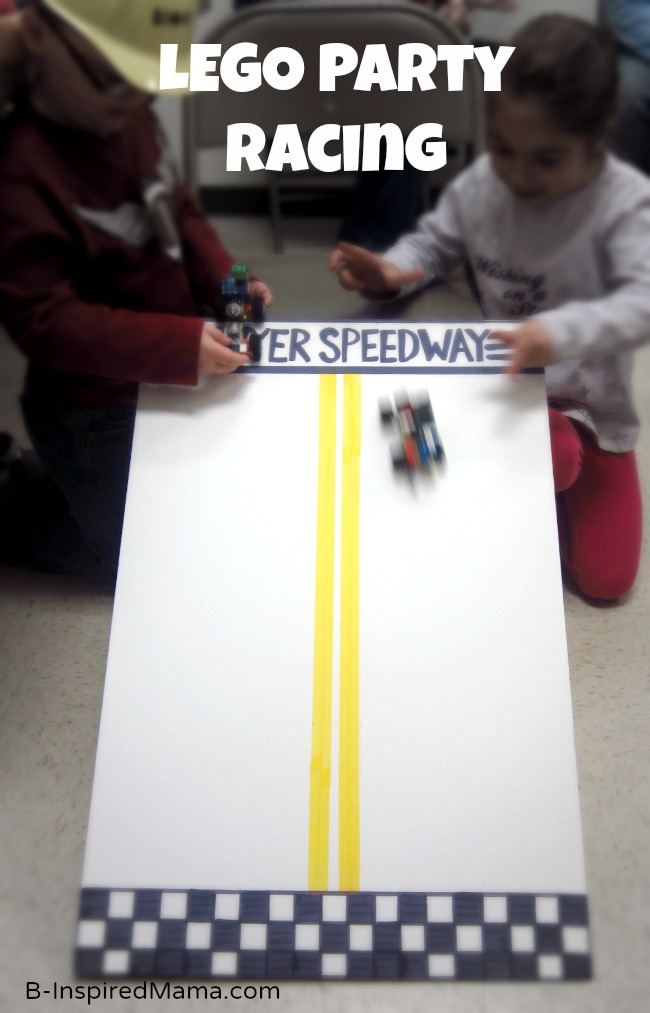 I used a yardstick

and black and yellow permanent markers

As the kids arrived, they got a set of LEGO wheels

and a cup of LEGOs

to build their own speedy race car.  When everyone had their racecar ready, we propped the racetrack up on a chair and let the LEGO races begin!

Pin the Party Hat on the LEGO Man Game: 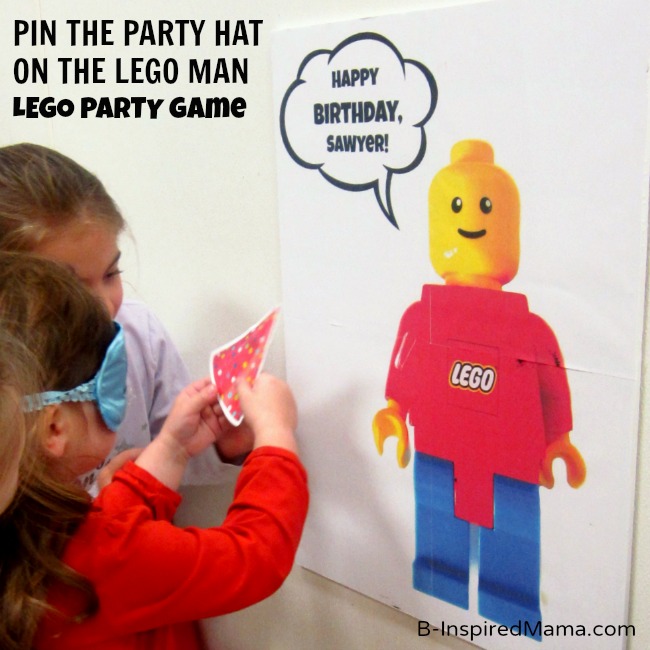 I took a closeup photo of Sawyer’s LEGO man to create this LEGO man poster.  I uploaded the photo into PicMonkey and added a speech bubble with “Happy Birthday, Sawyer!”  I printed it as a tiled image on 4 sheets of paper and then used rubber cement

to paste them onto a sheet of foam board

.  Then, I printed a party hat on cardstock

and cut it out.  We just used a little masking tape

“roll” on the back of the party hat for it to stick to the poster. (You can find the image for this poster and the party hat in the free LEGO printables below!)

The kids loved being blindfolded

and spun around before trying to pin the party hat onto the LEGO man. 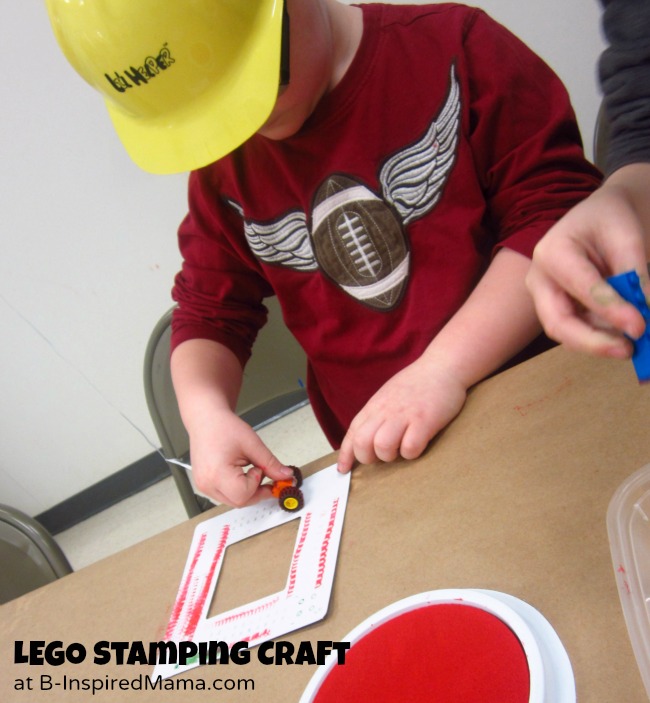 (including wheels) and a kids ink pad

.  Then I gave each kid a pre-cut cardstock picture frame

to stamp on.  I showed them how to press the LEGOs onto the stamp pad, then onto the picture frame to make interesting marks and designs.

There were two kids at a stamping station at a time.  When I yelled “LEGO,” they rotated to the next station to their left.  The kids loved experimenting with making marks with the various LEGO pieces and wheels. 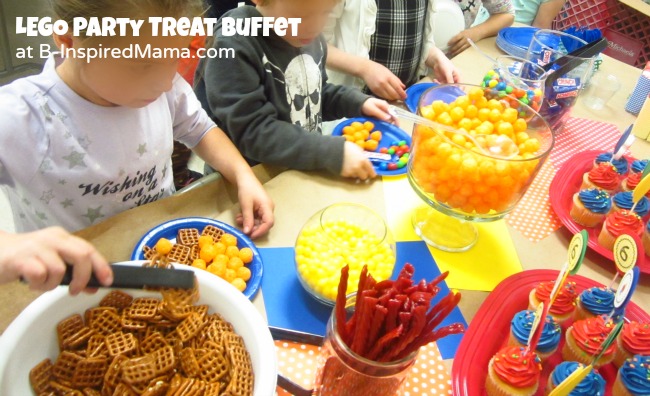 and some plastic scoops

to create a colorful kids snack and candy bar.  I chose candy and treats that coordinated with the bright primary colors of LEGOs.  Twizzlers

… YUM!  I think the kids liked feeling all grown up, scooping and serving themselves their treats. 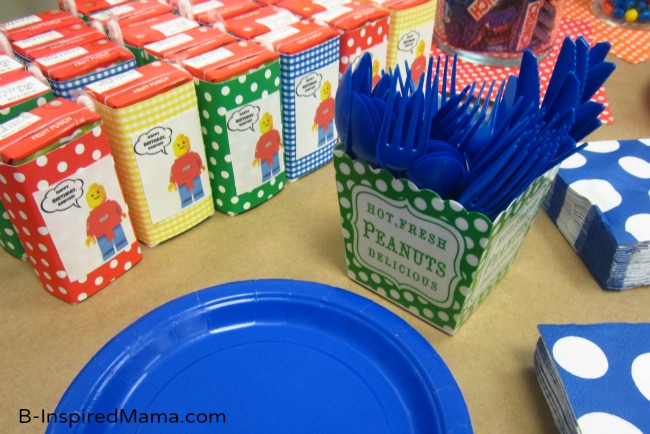 to wrap and decorate some Fruit Punch juice boxes 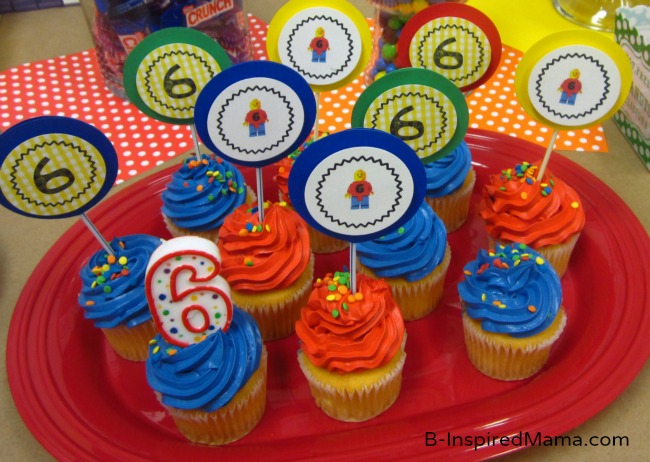 I used my PSA Peel and Stick Stamps

, and the LEGO man graphic again (from the free LEGO printables) to make fun cupcake toppers, too.  I used some dot adhesive

to adhere them to some cocktail straws

that coordinate with the primary color scheme. 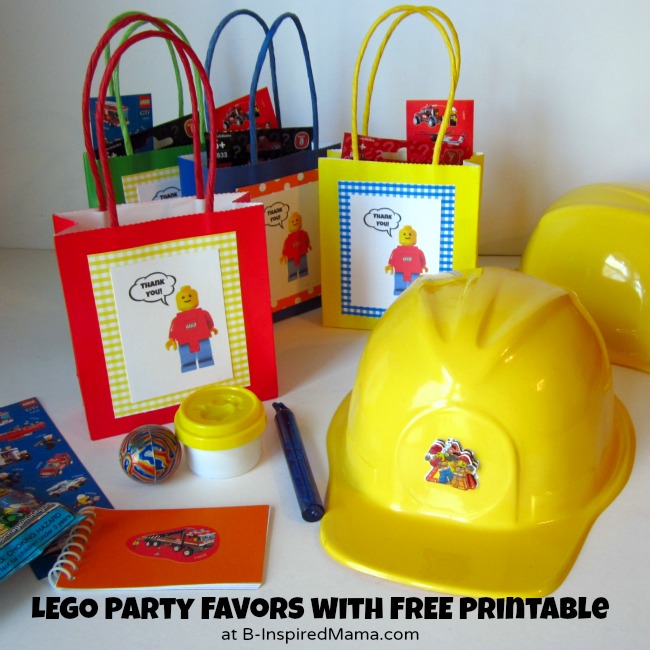 Finally, I used the same LEGO man graphic with “THANK YOU!” in his speech bubble (from the free LEGO printables) and more colorful coordinating scrapbooking paper

for the party favors.

I threw in some colorful trinkets

and the kids were loving them!

with LEGO stickers for the kids to wear at the party and take home, too.

Does your child want a LEGO-themed Birthday Party, too? Grab the LEGO printables I created to use for your LEGO party, too…

Get Your LEGO Party Printables!

Join B-Inspired Mama's Newsletter List & get this awesome and totally FREE Printable right in your inbox!

Great! Now, pop on over to your email to confirm and download your printable.

No Time to DIY your Kid’s LEGO Party?

Previous Post: « Mama Knows Best: For Mother’s From Mothers [Olusola from My Twintopia]
Next Post: Christmas Activities from The Kids Co-Op »