I drove two hours today to take Sawyer for his followup with his Pediatric Dermatologist for his infantile acne. Yes – he has ACNE at the age of two! Apparently it is exactly the same acne that any teenager has and is treated in pretty much the same way, but it is in infants and toddlers, especially boys. At first I thought that it was related to his steroid inhaler that he takes twice daily for asthma, but his doctors all assure me it is probably not. Instead, it seems to be one very BAD thing he inherited from his dad. So we travel to a specialist every few weeks to battle this beast before it scars his sweet baby skin. We fit it in between our trips to his Pediatrician for sick and well visits, his Pediatric Allergist for his asthma and allergies, and his Pediatric Ophthalmologist for his amblyopia and eye glasses. Sometimes I get frustrated with juggling appointments, entertaining the kids during endless office visits, and paying for prescriptions. 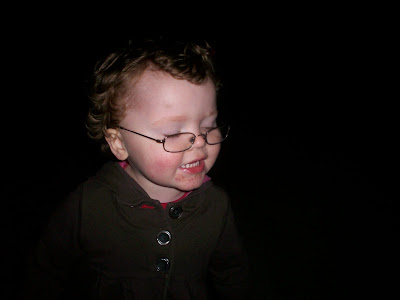 And then I think back to when I had that emergency c-section after ten hours of (drug-free) labor and two hours of pushing. When Sawyer was pulled from my womb, he aspirated meconium, required resuscitation, suffered a double pneumothorax, and required resuscitation again during transport to the NICU in a hospital 30 minutes away from the one I was required to stay and recover in. He stayed in the NICU for only 5 short (yet still heart-wrenching) days. But while in the NICU, he had a precautionary MRI that showed PVL – damage to the white matter in his brain. We were told that this may lead to cerebral palsy or other developmental and physical delays. And we were told that this damage would NOT repair itself and may even get worse as the brain develops. He was immediately enrolled in Early Intervention and received twice-weekly physical therapy for tightness in his legs. At six months of age, he had a follow-up MRI that showed NO DAMAGE at all! And about that same time, he was released from early intervention, because he was developing normally and no longer qualified. To this day, no doctor can explain it. We don’t know if it was a medical error or a medical miracle, but we’ll take it! And we’ll take infantile acne, asthma, and a lazy eye any day!